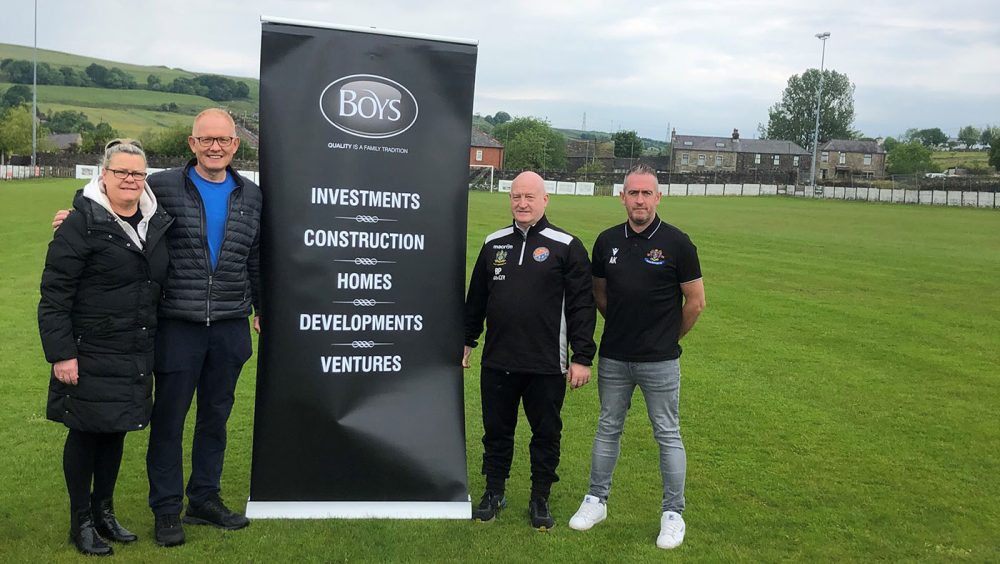 B&E Boys are pleased to announce that the company is set to continue its long association with Bacup Borough Football Club. We have extended our sponsorship of the football club for another two years.

B&E Boys has always actively sought opportunities to support community clubs, charities, and groups in whatever way we can. Grassroots football is the lifeblood of the local community, so we firmly believe that Bacup Borough Football Club is totally deserving of our support. Of course, the riches of the Premier League are well known but lower down the football pyramid, money is extremely tight.

Brent Peters, who has been Bacup Borough FC’s manager for nearly 25 years, had this to say, “Boys have been an important and integral part of Bacup Borough since my time at the football club which will be 25 years in September. I am so proud and pleased for us to be associated with such a well-established local firm that prides itself on quality. The longevity of our relationship is something I feel honoured and privileged about. On behalf of everyone associated with Bacup Borough Football Club, I would like to thank John, Peter, & Michael Boys for their continued support.”

In response, John Boys commented, “We are pleased to announce our two-year agreement with Bacup Borough Football Club based at the Brian Boys West View Stadium. We are proud to be associated with a local club in a town where the business was founded in 1961 and offers opportunities for local players with youth teams under the club umbrella. In these uncertain times, we believed that a two-year commitment to the club would offer a little stability.”

The company’s association began in 1997 when founder and chairman, Brian Boys, first got involved supporting BBFC. Over the years the Boys name became a huge part of the football club. When Brian Boys sadly passed in 2017 both the club and the company were adamant that Brian Boys’ legacy should always remain, and that B&E Boys wanted to continue its support for the football club. The stadium – The Brian Boys West View Stadium – is named after Brian Boys. The Boys brand logo has featured, as main shirt sponsor, on BBFC’s senior team shirts, and all the youth team shirts. This is particularly fitting as B&E Boys have always looked for ways to support young people in the local community.

B&E Boys are proud to be an official partner of Bacup Borough Football Club and are thrilled that sponsorship of team shirts is continuing for a further period of two years.

We are all looking forward to the start of the new season. Bacup Borough Football Club are full members of the Lancashire County Football Association and compete in the North West Counties League Division One North.

The club is holding its annual End of Season Awards at Brian Boys West View Stadium on Saturday 23 July at 7.00pm. Tickets for the Awards Evening can be purchased here.