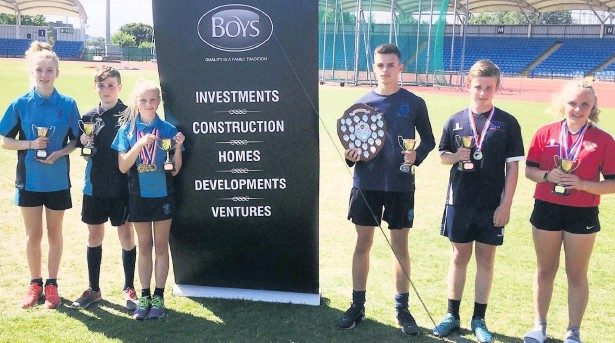 B&E Boys were proud once again to sponsor the Rossendale Secondary Schools Athletics Championships, which took place at the City of Manchester Stadium at Sportcity.

Alder Grange High School amassed a fantastic total of 35 gold medals on the day and set 4 new records too.

Alder Grange pupils set the tone for the day with Year 7 pupils, Ryan Heneghan and Phoebe Barker, picking up the first gold medals in the 1500m. Not only that, Phoebe also equalled the competition record. Another Year 7 winner was Chloe Broughton, who won gold for Alder Grange in the javelin and the 800m.

The Year 8 Alder Grange team dominated the competition. There were two double winners with Jahid Miah picking up gold in the 100m and shot. Jacob Walmsley followed suit in the javelin and discus. Other Year 8 winners included Rafiul Islam in the triple jump, Charlie Norman in the 200m, and Max Haworth in the 400m.

The success continued with Year 9. Joe Simpson won the javelin and then went to break the discus record too with a throw of 33.24m. Amelia Chadfield won gold in the 200m, breaking the record at the same time. She also won gold in the 1500m and the long jump.

Alder Grange certainly impressed on the day, but there were record-breakers across the board and some fantastic performances from the competitors from all 6 schools. New records were set throughout the day, including Vicky Elpia, from BRGS, in a time of 28.26secs in the 200m. Another BRGS pupil, Isabelle Cunningham, set a new record in the 300m with a run of 45.83secs.

Haslingden pupil, Ella Hall, broke the Year 9 shot record with a throw of 8.96m. Marek Balog, from Whitworth High School was also a record-breaker in the discus with an impressive throw of 23.78secs.

B&E Boys would like to congratulate all the medal winners and record-breakers from the Rossendale schools, as well as all the competitors who contributed to making the day such a success.

By sponsoring the event it was our way, as a local business, to give something back to the local community by encouraging young people to be active and to work together in competitive sport.