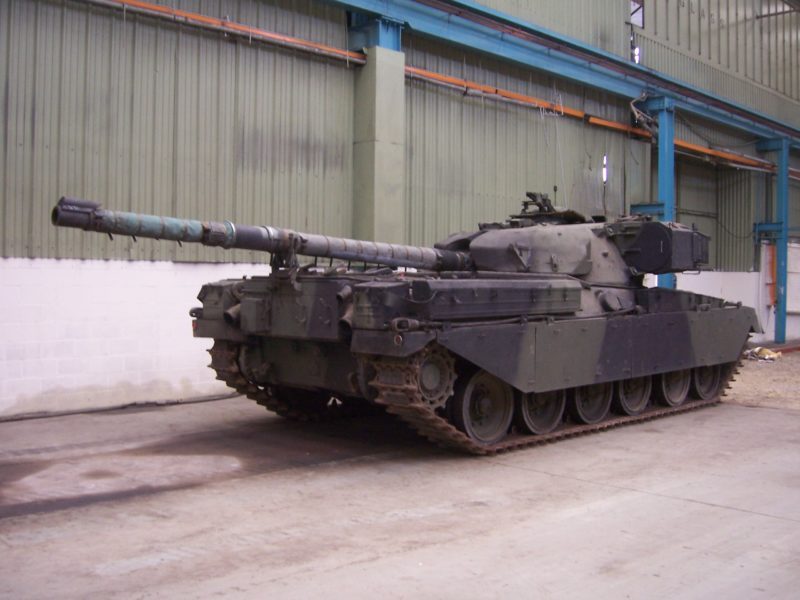 B & E Boys take delivery of a Chieftain Tank at their Waters Meeting Business Park in Bolton.

The Chieftain Tank was delivered last week to the Waters Meeting Business Park, in Bolton adding weight to one of the North Wests largest collection of military vehicles in private hands.

The Chieftain Mk 10 was the main battle tank for the United Kingdom in the 1970s. It was introduced in 1966 with the most powerful main gun and heaviest armour of any tank in the world.

Leyland built their own prototypes of the new tank design in 1956, and the War Office used this specification for a new tank The design was accepted in the early 1960s however the heavy armour meant reduced mobility as the engine power had its limitations which was the Chieftain’s main drawback. The Leyland engine was a multi-fuel engine but these were more complicated and therefore troublesome to maintain.

The armour was over 15 inches thick in places and the driver was in a lying down position in the hull when his hatch was closed down which helped to reduce overall height of the tank. The were three other crew members in the turret.

The Leyland L60 engine is a two-stroke opposed piston design and could run on petrol or diesel or anything in between.

The gun in the Cheiftain was a rifled 120mm canon which was loaded with a projective and a charge which were encased in combustible bags. Other tank guns had to store the spent shell cartridges or eject them outside where as in the cheiftain there was no shell casings. The charges were stored in 36 recesses surrounded by water jackets. In the event of a hit which penetrated the fighting compartment, the water jacket would rupture, soaking the charges and preventing a catastrophic ammunition explosion.

The gun was fully stabilised with a fully computerized integrated control system meaning the tank could travel whilst the gun remained locked on the target.

The final Chieftain version (such as the Mk 10) used by the British Army until 1995, incorporated “Stillbrew” armour

named after Colonel Still and John Brewer which was additional composite plate and rubber armour.

B & E Boys, or Select Military Vehicles as they are known,  have been collecting Military Vehicles for over 20 years and have supplied vehicles to collectors in America, Canada, New Zeland, Australia, Czech Republic, Holland, Germany, France, The Falklands and Ireland to name a few.