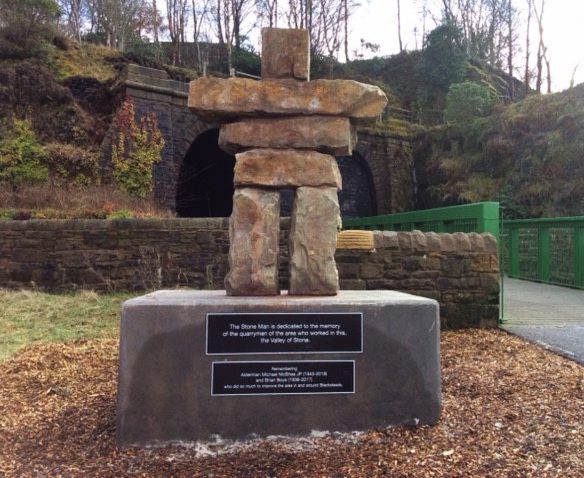 The Stone Man, a giant stone landmark to commemorate the workers who used to be employed in the stone quarries in the Rossendale Valley was erected recently. The monument, first mooted back in 2013, will stand at the entrance to the railway tunnels In Waterfoot.

The idea for the landmark was the brainchild of former Councillor, Alderman Michael McShea. Councillor McShea had contacted B&E Boys to ask if the company could be of assistance with a vision he had to erect a stone statue in the local area, similar to one he had seen an image of in Whistler, the popular ski resort in Canada.

Michael wanted the monument to commemorate the local workers who had worked in the stone quarries in the Rossendale Valley. Sadly, Michael was terminally ill with cancer at the time and passed away shortly after the initial conversation, but he asked if we could do our best to carry out his wishes.

The monument will be situated on Lancashire County Council land, but the whole process has been managed by the Stacksteads Countryside Park Group. The project has been headed up Councillor Jackie Oakes from the outset. It was agreed that B&E Boys would also organise a plaque in addition to the stone structure to commemorate the work that Mr McShae had done  in the Stacksteads area over the years.

It’s been a lengthy and complicated process to get to the position we are at today. B&E Boys organised the original permissions, coordinated the work and constructed the statue base, but none of this would have been possible without the assistance, guidance and valuable contributions from a number of people who have given their time to make Michael McShea’s vision a reality for the Stacksteads Countryside Park Group.

Structural Engineer, Michael Pooler, assisted with the structure, and Jon and Geraldine Edmonson achieved planning permission for the project. Gordon Lyons, of Lyons Stonework, sized, drilled and constructed the stone blocks on the site.

‘The Stone Man’ structure itself will be an impressive 2.2m high, but not too imposing. It will be located at a council-owned amenity area to the south side of the A681 (Bacup Road) in Stacksteads. The actual site is 25m west of the junction with the access road that leads to Hugh Business Park, Waterfoot. Access is gained from a public bridleway leading to the bridge over the River Irwell and the Grade II-listed railway tunnels.

The structure will have an arm-span of 1.45m. The front elevation will face a north westerly direction, visible from Bacup Road and the public bridleway. The Stone Man will be an impressive sight and a fitting memorial, not only to those who worked in the stone quarries but also to the dedicated service that the late Michael McShea gave to the council and the local community.

B&E Boys would like to extend thanks to everyone who has been involved in the project.