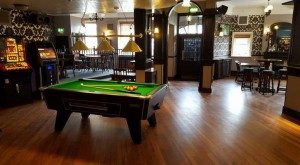 B & E Boys Ltd is delighted to have handed over two Lancaster pubs which were damaged in floods over the Christmas period.

Back in December 2015, terrible storms and flooding caused damage to many residential and commercial properties. B & E Boys were involved in the repair and renovation of both The Bobbin and The Yorkshire House pubs in Lancaster.

Both pubs are popular venues and are known for hosting live music evenings. The pubs run a variety of special events throughout the year including a May Day Bank Holiday Beer Festival, Battle of the Bands competition and The Lancaster Music Festival. It was of paramount importance to both the landlord and the community, to get the pubs back up and running as soon as possible.

John Cloister. who is the bar manager at The Bobbin in Cable Street, recalled how he went to inspect the pub cellar during the evening of December 5 and saw beer kegs floating around as the water made its way into the pub itself.

Speaking just before the re-opening, Landlord Andrew Greyson said that both pubs had looked like bomb sites during the aftermath of the floods.

At the opening of The Bobbin pub, Andrew explained the works which had been carried out during the six month closure, he said, “We’ve taken out one of the stage areas, which has opened it up massively, created a lot more room and openness making it a bit more friendly as well, and it works a lot better as a space.”

B & E Boys have enjoyed working on the restoration and refurbishment of these community pubs; however our services as a company cover a wider area. We benefit from a skilled workforce of over 100 people who enable us to work effectively in both the public and private sector. Our excellent reputation has given us access to prestigious contracts with values in excess of 5 million pounds. Our portfolio showcases a range of projects including buildings for education, health, fitness, commercial, retail and industrial.

As a company we are currently building new homes in the Rossendale area. The first phase of a recent project at Whimberry Place is near completion and there are further plans to continue development in the upcoming months.

B & E Boys are also proud owners of a range of business parks in the North West area as we recognise the growing need for unit spaces with flexible leases – for further details, or if you have a requirement, please do not hesitate to get in contact with us.