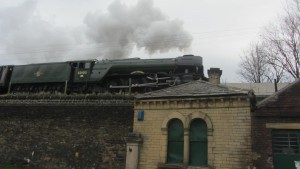 The Flying Scotsman Pays a Flying Visit to Keighley

As you would imagine, we had our cameras at the ready to capture the moment!

An icon of the steam age and the world’s most famous steam locomotive, The Flying Scotsman has been touring the country over the past year. After a lengthy overhaul, thousands of people up and down the country have had a chance to see the locomotive in action – with many also enjoying the privilege of a journey on board a special charter trip.

The Flying Scotsman is paying a flying visit to West Yorkshire and if you hurry there’s still a chance to catch a glimpse. The locomotive is on loan from 1st-9th April courtesy of the National Railway Museum. For nine days, The Flying Scotsman will join the KWVR (Keighley & Worth Valley Railway) fleet.

The visit of The Flying Scotsman is perfectly timed for the Easter Holidays and the opportunity to see this legendary steam engine is really one that shouldn’t be missed. The Keighley & Worth Valley Railway run plenty of other events throughout the year, making a trip a great day out. There is a daily timetable of steam train trips available with the service operating between Keighley and Oxenhope. Tours around Haworth Works and Rail Story at Ingrow are also well worth a visit. And, of course, the Keighley & Worth Valley and the station at Oakworth was used as the location for ‘The Railway Children’.

Peter Boys recently enjoyed a ride on the KWVR aboard the 5820. The locomotive was built by Lima of Ohio in 1945 and was first used to aid the US Army in the war effort in Europe. No. 5820 then saw service for Poland State Railways before being preserved by the Polish Railway Museum in Warsaw.

The locomotive was purchased by KWVR in 1977 and brought to Haworth. A year later 5820 began service in the Worth Valley. The engine was re-liveried to its original United States of America Transportation Corp. grey and featured in the film ‘Yanks’ which was shot on location in Keighley.

Peter Boys would definitely recommend a trip on the 5820. There can’t be a finer way of travelling across West Yorkshire.