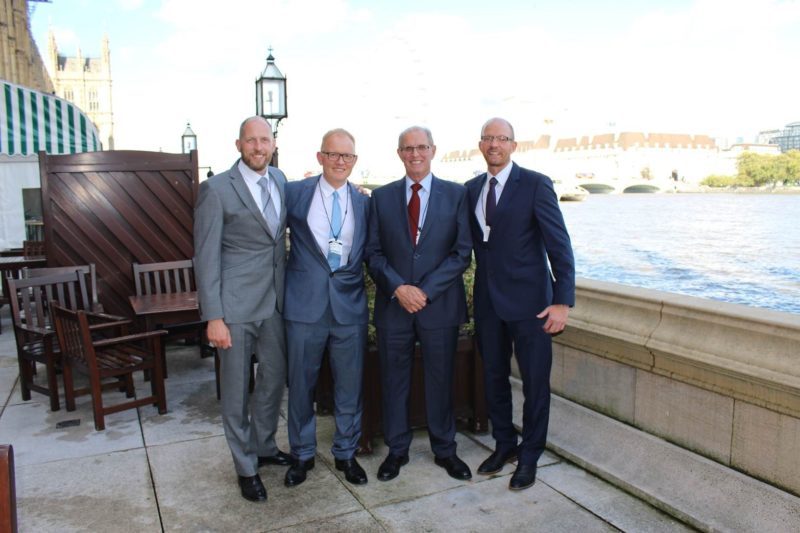 A much loved father to John, Michael, Peter, father in law to Jodi, Erica, Jane, grandfather to Georgia, Brennan, Jaxon, Ethan, Ella, Lauren, Alex and Harry, and partner to Janet Boys, suddenly passed away at home on Tuesday 3rd October on his 81st Birthday.

A remarkable and self-motivated man, Brian was born on East Street Woodcroft, Rawtenstall and later went to St Pauls Primary School Constabulee, Alder Grange Secondary School before starting a 6 year apprenticeship at Accrington college and then Burnley College becoming a joiner apprentice for Sedwick and Harrisson in Rawtenstall. After completing his apprenticeship Brian served 2 years National Service as a Military Policeman remaining good friends with many of his comrades.

Brian, motivated by his parents William and Dora, set up in Business in Bacup, in 1961 at Albion Street Saw Mills, with his late wife Elaine Boys, manufacturing joinery items, undertaking maintenance works on the many mills locally, converting upper rooms to bathrooms in outdated properties locally as well as Funeral Directing.

Spotting opportunity Brian was a firm believer in the words, ‘you only fail when you stop trying’ and after 55 years in business Brian and Elaine had grown his Company through hard work and commitment with the help of their three sons to what it has become today. Such was Brians standing in the local business community that he was often invited to meet Political Party leaders such as Tony Blair, David Cameron, William Hague, as well as other senior political figures. An inspiration to his family and no doubt others besides.

Living in Rossendale all his life Brian was a keen football fan and in his early years in Bacup still found time and enthusiasm to coach Maden Park Rovers in Stacksteads, sponsoring St Josephs Football Club also in Stacksteads before becoming the main sponsor at Bacup Borough Football Club where he recognised the enthusiasm and drive of the Club Manager Brent Peters. Brian was also a keen Burnley football fan throughout his life and was regularly joined by his family, and grandchildren at home matches.

Throughout his life Brian has supported numerous local organisations and charities too numerous to mention but including Rossendale Hospice, Help for Heros, and more recently Rossendale Rotary.

Brian was also an avid and fastidious collector of wartime and post war Military Memorabilia and more notably Military Vehicles of which he became known internationally amongst Military Vehicle Enthusiasts, travelling far and wide across the world to add to what became one of the largest privately owned collections of Military Vehicles in the United Kingdom. He was invited on numerous occasions to visit Knightsbridge Barracks, preceding the Major Generals review of the Troop of the Colour.

Brian was also known locally for his part in organising the popular 40’s dance event The Swinging Blitz Ball at St Marys Chambers in Rawtenstall ensuring many of the attendees wore one of his collection of Military Uniforms.

Brian was good humoured in business, approachable to all, supportive to many, as well as working to construct new homes and employment space for job creation whilst employing and training loyal and dedicated staff, through work in the Rossendale valley, and further afield, yet remaining an amazing husband, father and partner. Always keen to offer help and advice Brian ensured his company trained many young people through apprenticeships, and

Brian will be dearly missed by loved ones, family, friends, colleagues, and acquaintances alike and on behalf of his immediate family we would like to thank the numerous messages of condolence and blessings at this time