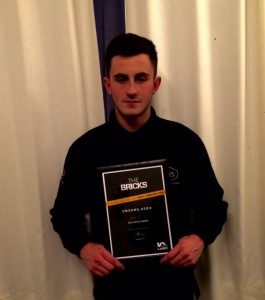 We consider ourselves extremely lucky working with many talented apprentices over the years especially Jack Silcox who was awarded the Paul Metcalf Memorial Award for high achievement as an apprentice joiner in NVQ Year 2 at Accrington and Rossendale College earlier this year.

Achieving further recognition of his hard work he has recently been Highly Commended for the Unsung Hero Award at the Bricks, which celebrates the best in the house building industry as well as recognising companies and individuals who stand out from the rest and go the extra mile to deliver quality in construction and design. This celebration evening took place at London’s highest iconic event space, Landing Forty-Two in Central London on Thursday 3rd November, hosted by novelist and TV Presenter, Gyles Brandreth.

Jack was naturally delighted to accept the award and explained that he “had always wanted to be a joiner/shop fitter and I am really enjoying the experience my apprenticeship is giving me. Working away from home has given me the chance to build my life skills and gain valuable experience working “on site” with other experienced joiners and tradesmen.

Jack has recently been working for the company on the Gateshead RNIB project and has continually proven to be conscientious and hard working. Peter Boys personally congratulated Jack stating, “Jack has shown commitment and dedication not only to his chosen trade but also as a team player within the Company – the award towards recognising this and providing inspiration to others”